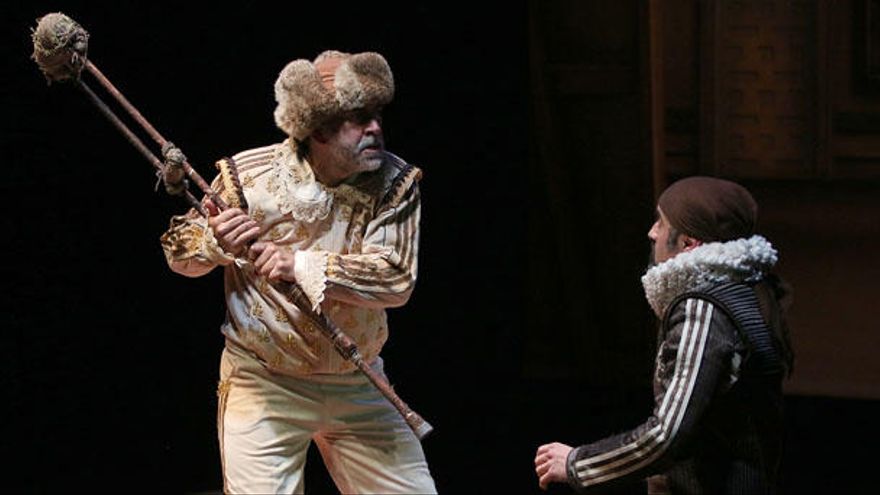 Reading Cervantes’ twelve exemplary novels, one of them surprises us, not only because of its perfection, which it undoubtedly has, but also because of the particular structure that makes it stand out among the other eleven. The distinguishing feature of this novel consists, as I will try to show, in the fact that it seems, in a good part of its action, to have been conceived for the stage, in its structure, more than novelistic, dramatic, theatrical. It is not possible to decide whether it was an arrangement by Cervantes or whether it is an application of the dramatic form to the novel; nor do I believe that an entirely satisfactory conclusion can be reached. However this may be, what is certain is that dramatic elements play an important role in the structure of Rinconete y Cortadillo.

If we accept the classical definition of theater, we will see that the episode of the adventures of Rincón and Cortado, contained in the play, is much more a presentation or representation than a narration. In my opinion, the particularity of this exemplary novel does not lie so much in the use of theatrical resources as in the fact that the conception of the work seems to have been theatrical or, to be more specific, entremesil; even though it was subsequently cast in the mold of a “novel”. And it is not only an impression or a theatrical atmosphere that can be perceived in Rinconete y Cortadillo, but I believe I can find in the play concrete elements on which to support the interpretation I have just outlined. Having stated the purpose of this study, I will now develop the subject, showing the reasons that have led me to this conclusion and which I believe can, if not absolutely prove it, at least provide clear indications that lead to the conclusion that Rinconete y Cortadillo is an entremés anovelado.

This comedy about the picaresque begins in the mysterious open ending that Cervantes writes: “y les sucedieron cosas que piden más luenga escritura”. Here the real Pedro del Rincón and Diego Cortado want to settle accounts with the author, since he has published behind their backs an episode of their lives for which they have been branded as rogues. They are condemned to stay together in order to survive, but perhaps this is the ideal moment to clean up their image. Will they succeed?

We inform you that the personal data obtained through this form, as well as your e-mail address, will be included in a file for which Asociación Escenarios de Sevilla is responsible, with the purpose of sending you information related to the Entity that may be of your interest.

This open, mysterious and provocative ending is the starting point of this play. What happened to Rinconete and Cortadillo after the success of this exemplary novelette? In this staging, the real Pedro del Rincón and Diego Cortado want to settle accounts with Cervantes for having published behind their backs a fleeting episode of their lives but which has condemned them forever to the image of rogues. A youthful success from which they could never recover. Like El Gordo y el Flaco or Los Pecos, Rinconete and Cortadillo are condemned to stay together to survive. But perhaps now is the time to clear their name.

In our work, the real Pedro del Rincón and Diego Cortado want to settle accounts with Cervantes for having published behind their backs a fleeting episode of their lives, but that has condemned them forever to respond to the image of rogues. A youthful success from which they could never recover. Like El gordo y el Flaco, Rinconete and Cortadillo are condemned to stay together in order to survive.

But perhaps now is the time to clear their name. If you are a subscriber, participate in the draw for five double tickets for Friday, October 28 at 8:00 pm at the Teatro de Rojas in Toledo.