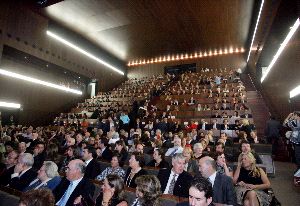 Located in the Plaza del Polvorista on a former 18th century barracks of an army cavalry regiment, this theater has a capacity of 600 seats. For its construction, accessibility criteria were taken into account. It is managed by the Department of Culture of the City Council of El Puerto de Santa Maria.

Accessibility: Its entrance is through a ramp level with the sidewalk, once inside, is accessed by a ramp with handrails to the main hall, where there is a pair of chaise longe. The access to the stalls is level zero. Access to the boxes is through an elevator.

The box office, located in the Municipal Theatre itself, explained the mayor of the area, Lola Campos, will open from six to eight in the evening. The sale of new season tickets will begin on Saturday 16 from 11.00 to 13.00 hours at the box office itself, through the page www.tickentradas.com and telephone 902 750 754.

The purchase of the theater season ticket represents a saving of 20% on the individual purchase of theater tickets and will allow the user the possibility of renewing it in future seasons. The price ranges between 46 and 27 euros depending on the theater area chosen.

Friday, February 13, at 9:00 pm. Classical stage, 1 hour and 15 minutes plus intermission. “PABLO AMORÓS (Piano), with a program of Chopin, Albéniz, Jurado and Falla. A recital full of sensations that will reveal the elegance, temperament and charisma of the pianist from Cordoba, one of the great interpreters of the romantic repertoire of today.

Saturday, March 7, at 9:00 pm. Theater, one hour and 15 minutes long without intermission. “DINNER WITH FRIENDS” by Donald Margulies. Winner of numerous awards and recognitions shows us the world of the couple through the relationship between two couples friends who have known each other since youth and whose unbreakable friendship comes into conflict and falters… humor, sensitivity and tenderness flow throughout the play.

Friday, March 20, at 9:00 pm. Classical Scene. Women’s Chamber Orchestra “ALMACLARA – INÉS ROSALES” presents “Sonando de Cine” (Violin, viola, cello, double bass and harp). The Women’s Chamber Orchestra, pays tribute to the great Classical Film Soundtracks, reinterpreting the best known works, through a selection of the pieces that made some of the most significant titles of the filmography.

A total of six local amateur groups, one more than in the previous edition, will show their work during this weekend and the first of July.  Y Media Teatro, Los Arriesgaos Teatro, Scenarium Teatre, Aquelarre Teatro, Teatro Balbo and Teatro Solidario Tesón are very heterogeneous groups with a wide variety of registers and styles that will represent a total of six theatrical performances.

On Saturday, June 26, it will be the turn of Scenarium Teatre to present the play No es un día para bodas (It’s not a day for weddings). The play is an original tragicomedy by Pablo Sánchez Moll. The tragicomedy is about a wealthy family and the wedding of the eldest daughter, Claudia, with her partner Pablo. Everyone seems very happy with the situation, except her sister Miriam, who is locked in the fact that Pablo is marrying her sister for money, causing her to have doubts and making her ask her future husband for a separation of property, which he willingly accepts.